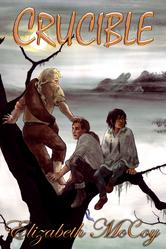 When Dareus Kymus traveled to the Empire to seek a bride for his brother, he didn’t plan on getting captured by pirates. Now his luggage is reduced to the clothes on his back and a few hidden alchemies, his traveling companions are an Imperial Wind-priest and a foreign “Bride of the Gods,” and the itinerary includes a cross-country trek through ancient, poisoned battlegrounds – all while staying ahead of the slavers who want to recapture them.

Dar thought he’d been in scrapes as a lad, but the blightlands of the Empire are a crucible beyond his imagining. It will take all his luck, skill, and the talents of his companions to have a prayer of returning home . . .